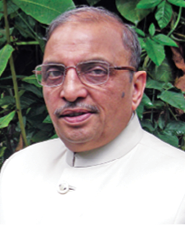 Dr Deepak B Phatak is Chair Professor at Indian Institute of Technology-Bombay, India. He graduated in Electrical Engineering from Indore and then completed his MTech and PhD in Computer Science. He is with IIT Bombay since 1971.

He served in the Department of Computer Science and Engineering till January 2000 and was the Department head from 1991 to 1994. He also served as the first Dean of Resource Development for IIT Bombay from 1995 to 1998. He was invited to head the Kanwal Rekhi School of Information Technology set up in October 1998 at the Institute.

He has been an eminent consultant and advisor to many organisations on various issues related to Information Technology.

He works on several committees advising Government departments on issues related to computerisation. Dr Phatak is on the boards of IDBI Bank, ISIL, UTIISL, NIBM, IDRBT, Bank of Baroda, and NIA. He has recently published an edited book entitled Infrastructure and Governance.

Back to top button
Close
We use cookies on our website to give you the most relevant experience by remembering your preferences and repeat visits. By clicking “Accept”, you consent to the use of ALL the cookies.
Cookie settingsACCEPT
Manage consent