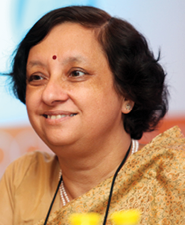 Dr Deepali Pant Joshi is the former Executive Director of the Reserve Bank of India. She is a development Economist and a writer on economic subjects. Her professional responsibilities have included the Department of Currency Management, Legal Department and Premises Department. She was the First Appellate authority under the Right to Information Act, as well as the RBI nominee on the Governing Council of the Institute of Banking Personnel Selection (IBPS) and Director on the Board of Bharatiya Reserve Bank Note Mudran Private Limited (BRBNMPL).

Dr Joshi has also served as the RBI Regional Director of Rajasthan. Prior to her appointment as Executive Director, Dr Joshi was responsible for the Customer Service Department and Rural Planning and Credit Department.

Dr Joshi is a fellow of Harvard University Asia Centre where she did postdoctoral research in the areas of Finance and Economics. She holds a doctoral degree from the University of Allahabad and Law and Management degrees. She joined the Reserve Bank of India as a direct recruit in 1981 and has been with the Reserve Bank since. She has held several important professional responsibilities as Chief General Manager in charge of Urban Banks and Currency Management and administrative responsibilities at RBI Hyderabad. She was the Banking Ombudsman for the State of Andhra Pradesh and Principal, Bankers Training College and Director on the Board of Andhra Bank. Her previous professional responsibility was Chief General Manager in Charge of Rural Planning and Credit Department. She is a prolific writer and has four significant books to her credit. She renders faculty support to the College of Agricultural Banking and has lectured extensively at the IAS Academy at Mussoorie, at the Administrative Staff College, Hyderabad and at several Indian and foreign Universities. She has represented the RBI in several important International Conferences and is the India representative on the Financial Inclusion Expert Group of the G-20. Her policy interests lie in the area of welfare and development economics, law and currency management.

Back to top button
Close
We use cookies on our website to give you the most relevant experience by remembering your preferences and repeat visits. By clicking “Accept All”, you consent to the use of ALL the cookies. However, you may visit "Cookie Settings" to provide a controlled consent.
Cookie SettingsAccept All
Manage consent