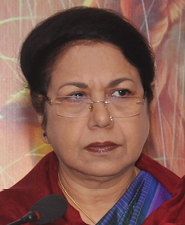 Ms Zohra Chatterji was Secretary, Ministry of Textiles in the Government of India. She belongs to the 1979 Batch of the IAS, UP Cadre and has held several important positions in her home state including Secretary and Director Industries. Labour Commissioner, Secy & DG Tourism, Secy & Project Director Basic Education etc. Her last assignment in UP was Principal Secy IT & Industries when she was awarded the Prime Minister’s Award for Excellence in Public Administration.

She joined Govt. of India on Central deputation in 2007 as Joint Secretary Broadcasting in the Ministry of Information & Broadcasting. The issue of broadcast regulation/self-regulation came to the fore during her tenure and the Electronic Media Monitoring Centre was set up at this time. She became Member Secretary, National Commission for Women on promotion as Additional Secy and was associated with drafting landmark amendments to the Criminal Law Amendment Bill and the Act for Prevention of Harassment of Women at the Workplace. She went on to serve as Additional Secretary Coal where she also held additional charge of CMD Coal India as its first woman CMD and chaired the IMG for monitoring and deallocation of coal blocks. She became Secretary to Govt. of India Ministry of Textiles in Feb 2013. She has a passionate interest in handlooms and handicrafts and introduced many new initiatives for the same including the setting up of a Hastkala Academy in New Delhi for documentation, promotion and preservation of handicrafts.

Ms Chatterji is a graduate in Physics from Miranda House. New Delhi. She did her post-graduation in English Literature from AMU and had her schooling in Loreto Convent, Lucknow where she won the Inter-Loreto gold medal and trophy for the best all-around student for 3 years running. Her many interests include painting, photography, dramatics and writing.

Post-retirement, Ms Chatterji is serving on the Board of NCML as an independent Director. She is currently the President of Alliance Francaise de Lucknow an organisation for the promotion of French language and culture supported by the French Govt. ‘She has also been Chairperson of the UP Institute of Design.

Back to top button
Close
We use cookies on our website to give you the most relevant experience by remembering your preferences and repeat visits. By clicking “Accept All”, you consent to the use of ALL the cookies. However, you may visit "Cookie Settings" to provide a controlled consent.
Cookie SettingsAccept All
Manage consent